I’ve been thinking more and more about the parallel or analogy that bikes and bike riding are for my life.
It’s obvious that 1) I can’t make up my mind about much 2) My interest comes and goes in huge waves 3) I don’t excel at anything, but do quite a lot to make up for it 4) I don’t nurture relationships as much as I could (rust on the stem bolts on my Seven? What am I thinking?) 5) I always want to do slightly more than I’m willing or able to put effort into.

Here are some going-ons:

My friend Aidan, who crewed for me when I raced Norseman in 2007, is racing the Iditarod Trail Invitational . 350 miles, unsupported, across Alaska in the winter. Starts this Sunday.

Not sure what to add about this. Have fun?

Next weekend here in Los Angeles is the Bike Summit, Saturday 9am to 4pm. I had not heard much about it and was hesitant to get involved (I never really did), but looks like a great day of workshops and speakers. The preceding Friday, the 6th, I am part of the Root Down ride, a bike tour through the city stopping at historical points in LA bike history from 1999-2009.

I’m going to be talking about More Than Transportation, a bike weekend event with workshops, rides, races, parties, etc that happened in 2002, 2004, 2005 (part of Bike Summer) and 2006. I wanted there to be a stop about the time in 2004 that Critical Mass rode through three grocery stores to support the striking Safeway workers, but it is not going to happen. That night was amazing.

Speaking of protests and political activism, I’ve been painfully keeping up with Green is the New Red, a site that “focuses on how fear of “terrorism” is being exploited to push a political and corporate agenda.” Will articulates how the “T-word” is being used to silent legal environmental protest (see the 5 step process). It’s saddening to read what has been happening, but the existence of this site and the material they are putting together is helping to fight it. Check it out, it’s worth your time. And to all of you mainstream environmental groups who think this does not pertain to you, I have this poem:

And I realized that I have not reported on our 24-hour race in Tucson, which was two weeks ago now. Oops. It was great fun. Riding, hanging out, eating, sleeping, chilling, making hot drinks, riding, repeat. I’ll try to get more together for that.

Here are the hills for this year’s event. Three new ones!

And we’ve got a few training rides

Feb 28th- 750am
Leaving from Highland Blvd-south of Franklin (map)
58 miles (8 big climbs) on and around Mulholland Dr. (route looks amazing)
Swarm! is not involved, it’s a regular Caturday Warriors ride. Here is the post on Midnight Ridazz.

Sunday March 1st- 830am
Meet at Cycle Way Coffee in Hermon (map)
We’ll ride hill number one in Mt. Washington and then cruise through Glendale to ride two great climbs near Chevy Chase blvd (Epicer and Catholic School Girl in our lingo).
Probably about two hours. Contact: bikeswarm at gmail.

Saturday March 7th- 9am
Leaving from Ballona Creek Bridge
We’ll do some short, steep, hill intervals on the westside.
2hrs (stages, not riding the entire time)
Mileage to be determined
For info hit up Brian: sellyourcarandgetabike at gmail or here

I’ll try to get a couple more scheduled and will post here. Thanks everyone!

Plus a stop at Loma Linda market.

Once upon a time, not long ago I said I wanted to race 24 hour mountain bike races. This of course is after saying I would never race 24hr events.

This weekend is the 24hrs of Old Pueblo near Tucson, Arizon. Here’s what we’ve got:

A recipe for awesomeness.

Max aka AdventureSNORE and I are on a two-person team and Jack aka mEGO and Mark Kiecker are on another. We are stoked to ride, hang out, get some miles in and enjoy the start of the 2009 season. Then we saw this photo from the course: 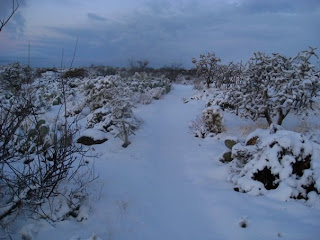 I thought this was the desert! No, I actually know better. The lesson was learned when I was 19 and driving through Arizona (Florida to California) and totaled the car I was in due to ice (and the wreck in front of me). The weather should improve and I doubt we’ll actually be riding in much snow.

In 24 hour races the course is a loop and each team member takes a turn riding a lap. This weekend’s course is 17 miles. We may end up doing 2 or even 3 laps at a time just to give the other person a rest that lasts more than an hour and a half. You can keep up on our results, live, here. I’m not sure how it is going to be listed, but Max and I are named Swarm! while Jack and Mark are Swarm! A-team Super Elite or similar hyperbole. The race is Saturday at noon till Sunday at noon.

Thanks everyone who has given feedback and has shown interest in riding this year. We are all very excited. I hope to have the hills finalized next week. As of now there are two new hills that are just unbelievably awesome. What we need help with is promotion. Please forward the info to club lists, forums and anyone you think would be interested. Use this link: http://nowhip.blogspot.com/2009/01/feel-my-legs-im-racer-2009.html.

Bike choice- You can ride any bike you want! The fastest few are always on road bikes with normal gearing. A good all around bike would be a cross with slicks. Some people do ride mountain bikes and while they are not the fastest, by the 5th or 6th hill those not riding them will be envious of your granny gear. You may want to reconsider fancy, expensive wheels (see below) and please make sure your brakes work very well.

The hills- All ten are on open roads, most of them poorly maintained. Think pot holes, cracks, uneven pavement, debris. It takes more then strength; good riding skills will definitely come in handy.

Training rides- I haven’t scheduled any yet! Will do though. I recommend Mitcheltorena off Sunset and Duane off of Silver Lake Blvd as good measure hills.

No cars- Seriously. The starting point is easily accessible from Union Station and numerous Metro buses and trains. If you absolutely have to drive to the start, don’t plan on seeing your car till the end. If you want your boyfriend to come along but he can’t ride very well, you’ve got five weeks to get him up to speed.

Food afterward- We are going forward with a vegan picnic/BBQ in Elysian Park (Stadium Way & Academy Rd) starting at noon. It is a facebook event here. Some of you may not be into vegan food, but it’s how most of Swarm! eats and you don’t have to come! But you are invited and please tell others (and ask them to bring vegan food!). Check my sidebar for info on veganism and recipes. We will be honoring Bryan Farhy and the motivation he gives us to be active vegans and “fucking boring semi-employed geeks” at the same time. Year one was the year of the pancake, year four, which this is, is the year of the rabbit. We will celebrate by eating what is commonly referred to as rabbit food. And vegan corn dogs (the year of the corn dog is not for another 13 years and we can’t wait that long).

Support- Very limited. We will have a floor pump, but please bring everything else to fix a flat and minor mechanicals. There will be a utility bike that will be at the first few hills and then meeting us at the BBQ.

Thank you all and looking forward to seeing you on the 14th of March.

A few weeks ago the LA Times ran the article 7 alleged members of LA tagging crew arrested which included the following quote:

“The tag has been an eyesore visible from downtown high-rises and freeways for months.”

This is no ordinary tag. It’s a 1/2 mile long. Seriously. I see it whenever I take the 1st or 4th street bridge into town.

Also in the story was this fantastic photo (well, a photo of a photo):

Say what you want about graffiti or tagging, but I bet you can find other eye sores in this photo. I’d start with concrete banks lining every foot of the Los Angeles “river” (the tag is actually on the river banks, if you look close you can see the running water on the bottom of the letters). How about extremely poor use of space? Or the freeways. Those are quite an eyesore. How about the 4,000+ illegal billboards in our city?

I say that if one group of people think it’s okay to lay concrete anywhere and everywhere then they shouldn’t be surprised when (or have legal cases against) another group wants to paint it. What do you think?

Finally got out on the cross bike for the on-road/off-road adventure I’ve been stoked on doing for awhile. First big ride of 09? I went out to meet up the Midnight Ridazz mountain bike extension, the Mountaineerz. They were meeting in Brentwood at 11am, which gave me enough time to be creative in getting there.

Many people have heard of Mulholland Drive, but did you know that a big section in the middle is unpaved? I find it outstanding and amazing that in the land of freeways and obscene love of pavement that this treasure exists. I’ve ridden the eastern side, which winds up from the 101 and the Cahuenga Pass past Runyon Canyon park and along the ridge of the Hollywood Hills, many times. It’s twisty, fast and fun for about 15 miles. Then just beyond Sepulveda Pass it turns to dirt where I normally turn around and head back to the city.

Yesterday, riding my cross bike fresh with new front wheel, forks, stem, bars and 700×34 treaded tires, I kept going on the dirt. Climbed up and past the NIKE station. I’ve been here many times on dirt and now I’ve mentally connected where the pavement ends and the mountain bike spots begin. Turned left on Sullivan fire road and connected with the Sullivan Canyon single track where I had to defend my bike choice to some mountain bikers. Always makes me think of Chris Kostman’s 1993 article, Mountain bikes? Who needs them?. Worth reading in its entirety, but this sentence sums it up well:

“The mountain bike is the most over-rated, most improperly used,
most over-built, and most greedily promoted piece of hardware to
hit the sport and fitness industry in modern history.”

Hit the Whole Foods in Brentwood, grabbed some fruit and then 8 of us headed to near the PCH/Sunset Blvd for some single track climbing to fire road climbing to more exposed fire road climbing. Five ‘normal’ mountain bikes, one 29-er, and one single-speed with a coaster brake (was set up for the coaster brake only race series that recently ended). So much climbing. Though a positive correlation of climbing and the number of really attractive (and friendly!) female hikers helped. Went through Trippet Ranch, past Eagle Rock to ‘the Hub’.

After descending reliable backbone through Will Roger park and back to Brentwood, the 30-mile Mountaineerz ride ended and I took the city route 15 miles back home. Seventy-five mile day? About half on dirt. Exhausting. Next I’d like to ride Mulholland in its entirety from Hollywood to the ocean and back, probably 120 miles round trip including the 30 off-road.