Saturday I rode a 50-mile mountain bike ride to benefit Project Rwanda with Max and Jack. Years ago I read We Wish to Inform You that Tomorrow We Will be Killed with Our Families (here on google books) so I know a little bit about Rwanda. Project Rwanda was started by Tom Ritchey, the same guy that was around for the beginning of mountain biking and the guy who makes the break-away system I have on my track bike. On the website he says, ‘To me, the bicycle is just a freedom tool to a bigger vision for Rwanda.’ I couldn’t agree more, but I don’t think its use as a freedom tool is limited to Rwanda. He was on the ride and Jack and I chatted with him about our track bikes (‘How exactly did you get them?’ he asked), but I didn’t mention this to him.
I rode my freshly painted Cross-bike that was recently rebuilt with a bunch of new parts:

Jack rode his Kona mountain bike, that is set up fixed gear:

The ride started at 7am at Cook’s Corner, a place famous as a motorcyclists’ hangout. The route(with photos!) was made available beforehand and I had planned from the beginning to take my cross bike. I was a little concerned when about 75% of the bikes were full suspension! The course was beautiful and after only a few miles the hundred plus riders spread out.

Can you believe this is Orange County?

I was riding strongly, passing people on the climbs (I have a compact road crank, 50/34 and a mtb cassette that is 12-32) and getting passed on the descents. Cross-levers made the technical downhills much easier; which I learned the day before when Jack and I rode El Prieto in the San Gabriels. You can lean way back and still have access to the brakes. About 15 miles in I guess I was leaning too far back and pinch-flatted on a technical downhill. Probably for the best as it made me take it a little slower. Jack caught up while I was attending the flat and we rode together long enough to run into the guy from Planet Ultra who then told all his buddies about us at the HooDoo 500 earlier this year. With me on Cross and Jack on fixed the ‘look at us!’ factor was high.

The terrain was varied with fire roads, double-track, some fast, packed sections, technical single-track with stream crossings and steep, long climbs. I even passed some jumps that took all of my discipline to not go off of. Finished in about 5 hours, in time to hang out with Megan and Sufiya who had volunteered. They even had veggie burgers at the BBQ! I heard the fat, leather-wearing guy running the grill say, ‘We should of known all these healthy cyclists would want veggie burgers.’ Also, during the raffle the woman running it (also from Cook’s Corner) kept making reference to cyclists shaving their legs. How many mountain bikers do you think worry about healthy food and shave their legs? I don’t think very many.

Jack, Myself and Max giving the sign of devil to counter the earlier prayer

My only complaint (even the t-shirt is dope!) about the ride was the presence of god. At least two of the organizers are into god and insisted on talking about it and even had the audacity to have a prayer before the ride. They are not working directly for Project Rwanda, but I still think it reflects poorly on the project to have Christianity involved. The last thing Africa needs is more Christianity. Like the earlier statement about the bike as a freedom tool that is probably true for the whole world.

The Story of Stuff.
With cycling, and adventure in general, there is a return on the higher quality (more $$$) stuff you buy in that it lasts longer. It’s very difficult for someone as cheap as me to shell out the money, but I have found it economically and environmentally worth it.
Less stuff = Less work = More fun.

I think that is obvious.

But I am going to go further and say that it is also much, much more difficult to master the skills needed and there is far more pain involved. And watching it can get you way more stoked (on anything) than watching, well, anything else. Jamie Thomas’ part in Welcome to Hell (Toy Machine) has always been one of my favorite parts in a video, ever. Is this almost ten years ago? Also note that him doing the railslide barefooted was part of an ad campaign about making skate shoes that weren’t leather. Get stoked.

At first I could not believe the number of vegan blogs that exist and the amount of traffic they get. But it makes sense: No one likes to tell others about something they are stoked on more than vegans do. And is that not the purpose of blogs? Vegans are about 1% of the US population, but what percentage of bloggers do vegans make up?

Just look at this vegan blog and the amount of links to other vegan blogs!
I use this blog mostly to post about adventures and races, but I do admit to taking photos of food sometimes, so I might as well post them. Plus it is winter and adventures are on the minimum tip, while working to make money for more adventures is (slightly) more of a priority these days.

A vegan buffet in Oslo, Norway Second plate.
Note the corn on the pizza. I had falafel the
day before and it had corn in it as well. More dessert and coffee from Cornucopia Come check this out. Fun times. Special LACBC screening! We will be joined by director Sasha Edge, as well as the four cyclists who braved the Furnace Creek 508 on fixed gear bikes.

After an hour swim workout last night I rushed home to avoid the rain and had some free time. Finally got some photos from the summer organized. I am not sure what the netiquette is for this, but I back-dated the posts so the photos appear near the original stories.

Click on this photo for Norseman and Eidfjord photos 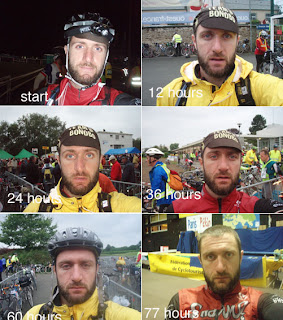